5 most endangered animals in Africa 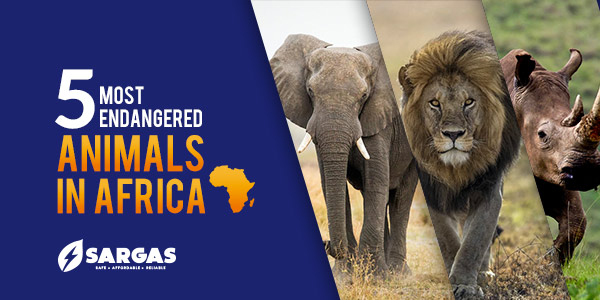 5 most endangered animals in Africa

The list of endangered animals in Africa is continually growing at a staggering rate. This is caused by a number of reasons ranging from, but not limited to; loss of habitat as a result of deforestation displacement, and of course, poaching.  In order to conserve the remaining species, some countries in Africa came up with some laws which have gone a long way to slow down the extinction of endangered species. This is because uncontrolled human activities will lead to animals becoming extinct.

Some of the most endangered animals in Africa include:

African Elephant: there are about just 600,000 African elephants left in the world. That is less than the size of Lagos! This is a result of poaching and displacement which has reduced the population of this animal to the point of extinction.

African Penguin: There are about 72,000 African Penguins left in the world. This number was arrived at as a result of oil spills, commercial fisheries, and fishing.

African Lion: Due to poisoning, hunting, and displacement, the current accounted population of the African Lion stands at 22,000.

Black Rhinoceros: After the African Western Black Rhino was declared extinct after a review of plants and animals in 2011, it seems that the same date awaits the black rhinoceros. The population is dwindling rapidly and currently stands at 3500 as a result of poaching because of their horns.

Cheetah: The fastest land animal in the world has been plagued by loss of habitat and human interference and there are around 14,000 cheetahs left in the world.

Advantages of LPG over Kerosene

5 NIGERIAN FOODS TO HELP YOU JOIN THE EXCLUSIVE FITFAM FAMILY!